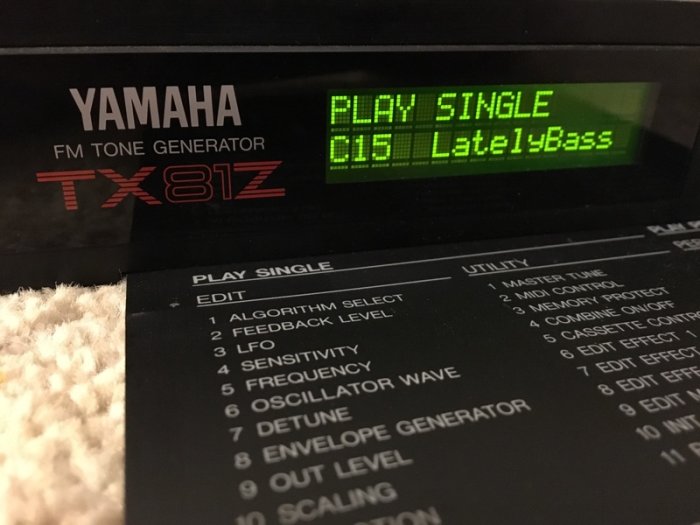 Yamaha TX81Z is a vintage FM tone generator rack module. This tone generator is a rack version of DX11 with some features that are similar to DX21 and DX27. Yamaha TX81Z module is legendary but also pretty underrated. The reason is, probably, too complicated parameter editing. Eight-voice polyphony, 128 preset sounds, and a 32 user presets come with the Yamaha TX81Z. With some of the most famous sounds, the Yamaha TX81Z can be seen in action with the LatelyBass, which was used in the biggest hits of the 80s era.

The price difference between a used Yamaha DX7 and Yamaha TX81Z is huge so if your budget is nonexistent or you just want to fool around with sounds from the most popular era of synth music then look no further because Yamaha TX81Z is the synth for you, or to be more precise a module for you.

LatelyBass was used in the songs below:

The Yamaha TX81Z was designed to be a cheap FM machine and has always been inexpensive compared to the other FM synthesizers. The low price made the TX81Z popular with many producers on a tight budget and is still used by part-time house and acid house producers.

Get Yamaha TX81Z on Amazon