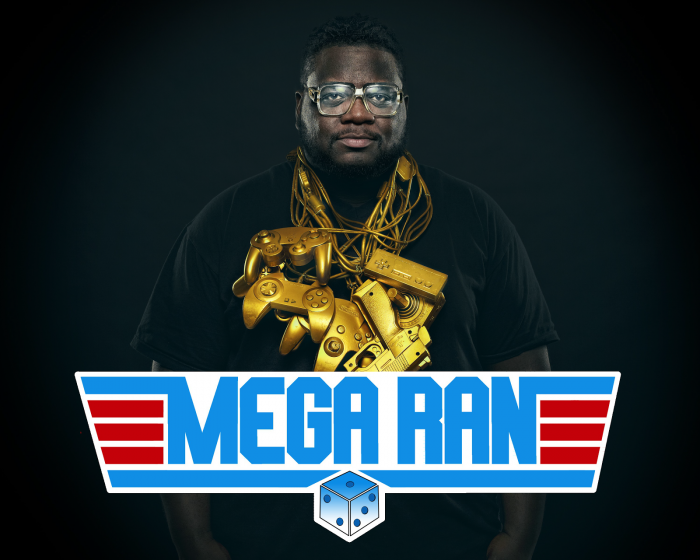 “When LA Weekly said that Ran’s “fanbase and niche audiences are growing at a rate not seen since Tech N9ne,” they meant it. A former middle school teacher, Mega Ran (formerly Random) blends education, hip-hop and gaming in amazing new ways, penetrating the farthest reaches of the galaxy with his unique rhyme style and electric performances.”

1. When and how did you first become interested in music? How long have you been playing music?
I’ve always loved music for as long as I can remember, thanks to my mom playing music in the house. I’ve been a pro musician for 5 years now, whatever that means, ha.
2. Who are your influences?
J Dilla, Prince, Marvin Gaye, Redman, MF Doom
3. Is your family musical?

No actually, not that I know of. I’m the only person doing anything with music in my family.
4. Can you tell us more about Strangers EP?
I loved the synthwave sounds on the Stranger Things show, which got me into the synth world and searching bandcamp, I found so many amazing musicians, so I got the idea to collaborate, because I hadn’t seen any synthwave-rap tracks.
5. Were you influenced by old records & tapes? Which ones?
Definitely. my mom had an old Richard Pryor comedy record that I used to sneak and listen to, and my first tape was Public Enemy’s “It Takes A Nation Of Millions To Hold Us Back.”
6. Who are your favorite musicians? Groups? CD’s?
I love Prince, Steve Wonder, Michael Jackson, and I really got into oldies coming up under my mom.
7. What skills/personal attributes are most important to being successful?
Being on time, working super hard, being nice to people, and executing your great ideas.
8. What personal advice would you give to someone wanting to pursue this career?
Work hard, don’t stop, and make yourself happy.
9. When was the first time you discovered Synthwave?
I’d discovered synthwave on bandcamp thanks to a few great links, I think Perturbator or Mitch Murder was the first I’d heard Synthwave, and then the rush of Stranger Things led to me finding so many great musicians.
10. Who is your favorite Synthwave artist?
Probably Timecop1983!
11. How important is image?
I don’t think it’s very important – but image is much more than visual appearance is a musical image, a calling card even.
12. What is your advice on touring?
Don’t tour until you’re ready — you will lose money the first time out, but
13. Are you looking for an independent label deal or a major label deal? (Why?)
Not at all, I’ve created an awesome indie network, and my label RandomBeats, is a home for creative young talent that I want to help push to the forefront. I’d be interested in partnering with someone who understands our vision, but otherwise, we’re okay out here.
14. What is your biggest achievement?

Probably getting this Guinness World Record recently! It’s a pretty amazing thing that I never imagined I’d have in a million years to be possible. Keep dreaming!