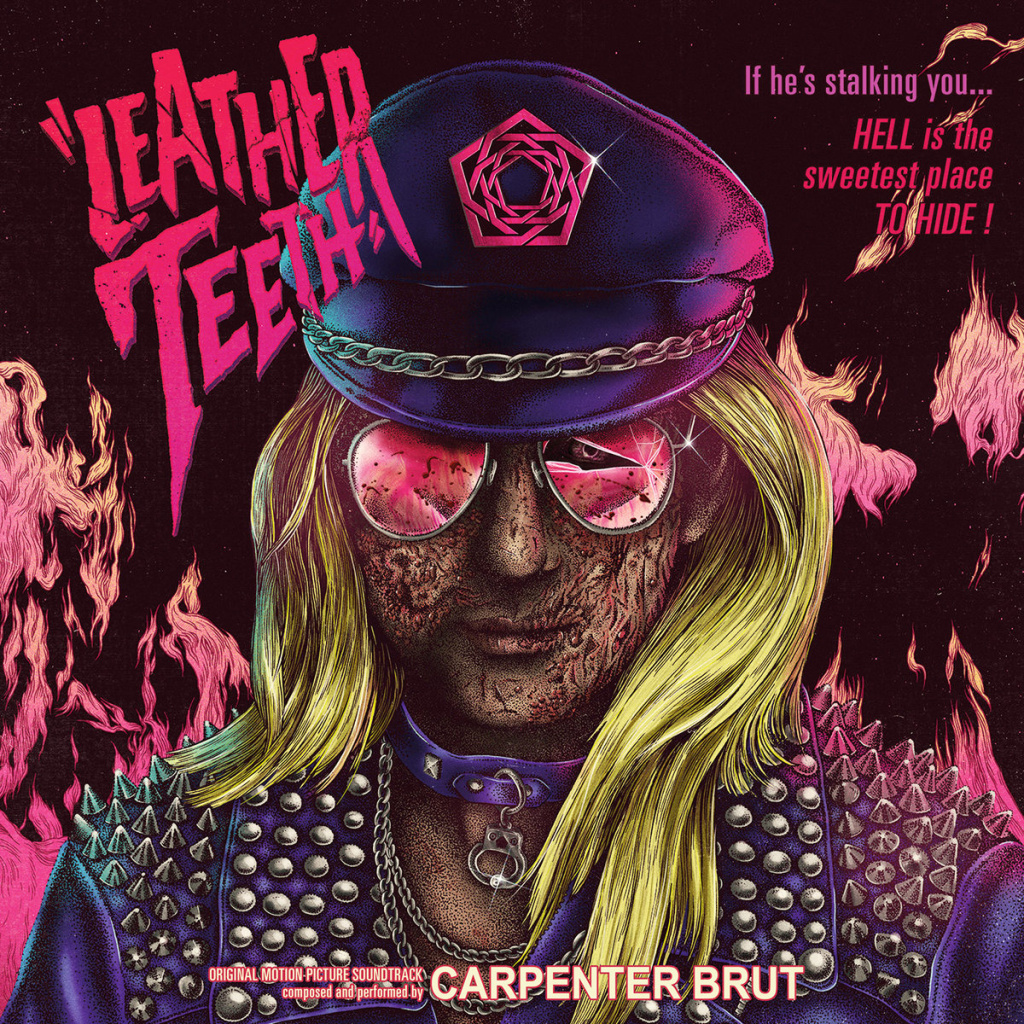 After a three-year hiatus, Carpenter Brut has returned to the darksynth genre he helped pioneer with an offering guaranteed to entice fans of past releases. However, the excitement for the long-awaited new album is diminished in significant amounts by the rapid and innovative evolutions that have taken place within darksynth since EP III landed in early 2015. The excitement is further cut short by Leather Teeth’s repetitive songwriting, campy guest vocals, and mutilated attempts at integrating metal music into darksynth. On the heels of a wave of immensely talented new creators, Carpenter Brut’s latest offering feels subpar instead of superlative, and there is little worthwhile content to glean from its patchwork of disconnected musical ideas. As with several other recent releases from synthwave‘s early innovators, Leather Teeth would barely be a blip on the release radar if it didn’t have a celebrated name on the cover.

The recording kicks off with a classic darksynth style, and many fans will be happy to hear the artist hasn’t followed the fork in the road toward experimental rhythmic songwriting alongside Lazerpunk, Perturbator, and Dan Terminus. Instead, the album maintains a logical stylistic trajectory from the three EPs on which Carpenter Brut made his name. Notably, the production grit on Leather Teeth has been stepped up a notch from Trilogy with moderately satisfying results, though there is now a chunky and poorly executed electric guitar bumbling its way through much of the recording. Worse, it quickly becomes clear that many of the songs have no particular purpose or destination in mind.

As part of the Synthwave 1.0 generation, Carpenter Brut’s past releases feel significantly outdated by modern standards, and “Leather Teeth” shows only baby steps toward a more rewarding listening experience. The title track presents a single musical idea with minimal deviation for its running length, and although the composition builds nicely for the first minute and enters a short break near the midpoint, it proceeds to beat its head against the wall in a repetitious grind for most of the back half. The genuinely exciting sounds of the opening moments consequently lose their flavor like inexpensive bubblegum, and the song arrives at its finish with an exhausted and awkwardly abrupt conclusion.

Given the difficulties of artists like Lazerhawk, Tokyo Rose, and Kalax to keep up with the compositional achievements and advancements of the synthwave genre in the past two years, it’s not surprising to hear Carpenter Brut smack into the same creative brick wall, yet the expectedness of it does little to diminish the disappointment. The static songwriting of the title track is hardly the last time listeners will be confronted with monotony on the recording either.

“Cheerleader Effect” arrives next with a surprising vocal performance from Kristoffer Rygg. Although technically safe and sound, the vocal delivery has a campiness to it that will turn heads on its first playthrough, for better and worse. The song is like a seedy, cigarette-stained grindhouse theater showing a triple matinee for a dollar. It’s enjoyable in spite of its goofy, low-rent personality, and the genre-defying vocals are at least notable for their uniqueness. A late break creates some welcome variety, and Carpenter Brut appropriately cuts the song length short before the music can wear out its welcome. Almost in spite of itself, the end result turns out to be one of the album’s more listenable entries.

“Sunday Lunch” comes next in the form of a funk-driven, full-length interlude and apparent nod to ‘70s porn soundtracks with its cheesy synth melodies and sax solos. It’s a satisfying piece of musical fluff that softens up the seriousness of past Carpenter Brut releases, and it reveals a welcome sense of humor only hinted at in older songs like “Paradise Warfare.” However, the oddity of it in relation to the first two tracks–themselves somewhat incongruent–makes it a questionable creative addition. Unfortunately, Leather Teeth’s conceptual schizophrenia spins from striking to gut-wrenching when the light tone of “Sunday Lunch” crashes into the murky disaster that is “Monday Hunt.”

Despite the increasingly prominent and well executed inclusion of metal guitar work in synthwave, few artists have attempted a full fusion of the genres, and with good reason: the diametric opposition of metal and synthwave make their combination a highly combustible one. Carpenter Brut heedlessly takes on the risks with “Monday Hunt,” but the amateurish execution leads to a creation that disgraces synthwave and metal music alike. Inept magma (aka nu metal) riffs pollute the song while sloppy drum fills bounce around in a cacophonous disregard for the long and cherished musical tradition of rhythm. The song’s technical execution is glaringly low by the standards of any metal subgenre, and the ugly contrast of the guitar and synthesizer causes them to swirl together into a muddy consistency that is the exact musical equivalent of mixing complementary colors. The result is an illegitimate child that synthwave and metal would both be better off disowning.

Mercifully, “Inferno Galore” steps in as a reprieve from the shame of “Monday Hunt” with perhaps the most likable rhythm and melody of anything on the album. Regrettably, the track also features the strongest Synthwave 1.0 songwriting approach on Leather Teeth, maintaining a single basic rhythm and melody for its duration. The simplicity soon wears out whatever redeeming qualities the music held at its outset, and it’s difficult to survive the monotony for the less-than-four-minute running time.

Another vocal track arrives on “Beware the Beast,” this time with Mat McNerney on the mic. If “Cheerleader Effect” is a slice of cheddar cheese, “Beware the Beast” is a block of Velveeta melted into an economy-size can of nacho dip poured over cheesesticks in the back of a double-wide trailer. The song dials its camp way past 11 in a trashy parallel to David Hasselhoff’s performance on “True Survivor,” albeit with even less technical skill and melodic appeal. Beneath the lamentable vocal track is another one of Carpenter Brut’s hack fusion attempts, this time with more of a contemporary hard rock vibe, once again churning out musical mud for the song’s entirety. It’s easily the least appealing entry on the album, and one of the most cringeworthy efforts from an established artist in the broader synthwave genre to date.

“Hairspray Hurricane” recovers somewhat with another effort in line with older Carpenter Brut creations. A raging darksynth rhythm holds a gleaming melody aloft to kick off the music with likable results, though the chunky electric guitar continues to tarnish the music with its bullish execution and murky sound production. A break at the midpoint drops the song into surprisingly agreeable, bluesy guitar licks followed by ambient horror synth tones for a valuable bit of compositional variety. However, it’s not enough to save “Hairspray Hurricane” from mediocrity, and a listener would be hard pressed to recall anything significant about the song’s character or identity once it reaches its conclusion.

The final entry, “End Titles” turns out to be the strongest offering on the recording. More funk elements arrive in the early going with relatively clean guitar tones pairing nicely with chime-like synth melodies. A gentle, rolling pace defines the first act, after which the bottom drops out of the song and Carpenter Brut casually toys with gentle melodic tones in a protracted interlude. When the music abruptly leaps into a bouncy new darksynth section with soaring synth leads, it delivers what is likely the album’s most rewarding moment. Although “End Titles” is enjoyable and remarkable relative to the rest of Leather Teeth, it still fails to linger in the memory and ultimately can’t come close to the strength of other darksynth releases from the past year.

Carpenter Brut’s Leather Teeth is, at least partly by design, the equivalent of a self-aware B movie. It’s deliberately campy yet also inadvertently awkward, sloppily made, and difficult to enjoy without an ironic sense of humor. Production values are low, the instrumentation is murky, and many of the songwriting choices feel like they were conceived in a fever dream. The attempts at integrating metal music were apparently executed by fingerless musicians, and the song selection, though commendably diverse, leans closer to schizophrenia than musical artistry. A pair of vocal tracks range from odd to cringeworthy, and the frequently straightforward song structures generate little incentive to hear even the most likable entries to their finish.

In a lamentable indication of the state of synthwave in 2018, Leather Teeth’s success with fans was guaranteed before Carpenter Brut wrote a single note for it. The undeniable significance of the artist’s contributions to darksynth’s origins has earned him a diehard following that will consume any offering without question, and Leather Teeth is a bold testament to their loyalty. This is Carpenter Brut’s Load, and it will thrive on the artist’s name recognition alone. That’s fortunate for everyone involved with the recording, because it’s the best thing it has going for it. In contrast with exceptional new darksynth creations from artists like Fixions, Shredder 1984, Neon Droid, and Isidor, the music on Leather Teeth is irreverent and frequently inconsequential, poking fun at itself in a self-conscious attempt to disguise its lack of technical skill and meaningful content. There are far worse synthwave albums in the world, but few have a more recognizable name on their cover.